The Salem Cherrians - Promoting Our Heritage 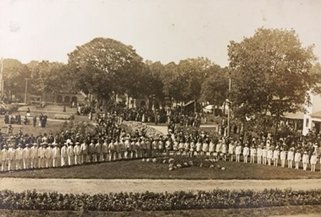 We touched on this fraternal organization during an episode focusing on the heritage of the cherry industry in Salem which resulted in our being named the "Cherry City of the World".  There were so many more photographs about the group than available space allowed that we decided to showcase them here.

The Cherrians were organized in 1913. This group of a maximum-100-membership (under their bylaws) formed by local businessmen to promote the wealth of the Willamette Valley and encourage other businesses to locate here. They organized themselves following the English organizational hierarchy used by their brothers-in-spirit, Portland's Royal Rosarians who formed in 1911. Their first leader was known as "King Bing," a position held by George F. Rogers in 1918 and Milton Meyers in 1914. Other titled positions included the "Keeper of the Orchards," the "Lord Governor Wood," the"Marquis of Maraschino," the Queen's Consort," "Chancellor of the Rolls," and, of course, the "King Jester."

The Cherrians sponsored and organized Salem's Cherry Fair/Festival from 1913 through the late 1940s, with a three-year respite during WWII when Salem was under blackout regulations. Events of the three-day event included a queen's coronation and ball, parades of decorated automobiles, games and contests at the Fairgrounds, and boat races on the river. As a lead-up to the annual festival, the Cherrians sponsored a motor-tour to view the best cherry blossom displays through the west and south Salem hills each spring. For many years, they sponsored floats in Portland's Rose Parade, held annually in June. 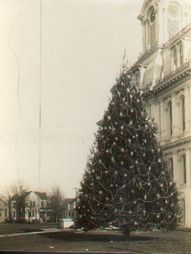 (Photo: WHC 85.051.0013.012)
From 1913 to 1951, the Cherrians sponsored the City Christmas Tree Lighting Ceremony, the first lighting of a living Christmas tree in the nation. According to a "Heritage Oregon" article in the Statesman-Journal in December 2016, this began in 1913 when the local owners of Salem Electric Company, Frank and Richard Barton, recent transplants from New York, devised the lighting ceremony for the 40-foot tree on the grounds of the Marion County Courthouse as a way to encourage the use of electricity in area homes and businesses. They were most likely influenced by the lighting of the first community Christmas tree the prevous year in New York's Madison Square Garden. The event was featured as "a gift to every man, woman, and child in the city as a publid demonstration of rejoicing and thankfulness." The ceremony included the treet, lit by 50 electric lights and a star on top, a parade by the Cherrians, a musical program, a closing speaker, and distribution of local fruits, nuts and candies to the children and clothing to needy families. The tree lighting event became a part of the community, bringing them together in unity and service. The last event, held in 1951, boasted of 1300 lights on the then-70-foot tree, four singing Santas and other Christmas music, a recounting of the history of the tree, and the final distribution of candy to all the children.  Sadly, the tree was removed in 1952 to allow construction of the new Marion County Courthouse.
During the 1920s and 1930s, the Cherrians flourished. They traveled in special train cars or drove in caravans to various events; Astoria's Fish Derby, Portland Rose Festivals, the Prune Festival in Vancouver, WA., as well as visiting towns all across the state.  They had their own band which played at events, along with a children's version named the Cherry-Bud band. However, as the cost of building the prize-winning floats increased over the years and their membership decreased, the Cherrians struggled to continue raising the needed funds and manpower.  They finally disbanded in 1968.

Here are a few of the many cool pictures of the Cherrians and Cherry Festival events we discovered.  Photographs are from the Salem Public Library's online historic photo collection.
Posted by Deb Meaghers, January 5, 2017

The Many Faces of the State Capitol

The corner of State and Liberty Streets has always been a prominent corner for commerce in Salem.  On the southwest corner is the former First National Bank Building/Livesley Building now known as the Capitol Tower Center, with the southeast corner once graced by the Guardian Building where Key Bank is now.  At the northeast corner we find the McGilchrist building and its adjacent Roth Building, recently restored.  The Gray Building, also the subject of recent renovations, anchors the majority of the northwest corner.  Built in 1891 by the three Gray Brothers, the building was sold in the early 1900s to Russell Caitlin and James R. Lynn.  Direct descendants of Caitlin, the McLeods, continue their ownership today.  Over the years, the building has housed  an electrical supply company (1920s), retail shops like the Smart Shop in the 1940-1950s, restaurants (currently the Brick), professional offices and studios.  The latest renovations undertaken by the McLeod family  have returned all the floors to usable space, created an area for a fine restaurant (Amadaeus) by merging two storefronts, and returned the facade to its once stately character.  Keep your eyes open for even more renovations to come! 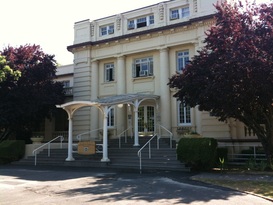 Dome Building Entrance; TN Green, Jr.
﻿The Dome Building was designed by Edgar M. Lazarus in the Neo-Classical or American Renaissance style and features a distinctive curvilinear awning supported by four metal fluted columns leading to a two-story entry supported by engaged cast-stone columns surmounted by a saucer dome over the building's center.  Construction began in 1910 and was completed in 1912.  The Dome Building is listed as a contributing property within the Oregon State Hospital Historic District, listed in 2008. The building was designated a Local  Landmark in the late 1980s.  The Dome Building currently houses office space for the Oregon Department of Corrections.  It is in fair condition, and retains most of its historic materials, including exterior cladding and windows.  Since its construction, the Dome Building has been minimally maintained, resulting is issues that may threaten its future viability and adaptive reuse.  The building was placed on Restore Oregon's Most Endangered List in 2014.  While the Oregon Department of Administrative Services (DAS) has announced plans to redevelop and/or sell the "North Campus" of the Oregon State Hospital Historic District, they have committed to preserve the Dome Building.